Spring break is just around the corner, and if you’re a teen looking for something to do the Surrey Public Library will be hosting my workshops!

Do you sometimes get stuck while writing a story? This workshop will unleash your creativity so you can say goodbye to Writer’s Block through the design of maps–whether you write fantasy, sci-fi, contemporary, or romance.

Many of the best-known authors these days got their storytelling start through a game called Dungeons and Dragons. Learn how this storytelling game can unleash your creativity through character design, plot elements, map-making, and collaboration. 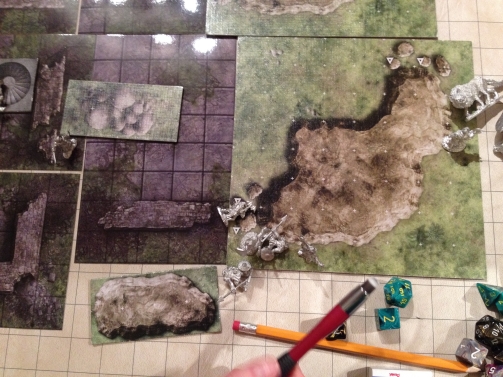 Do you enjoy those books that have multiple endings? Would you like to know how to create one of those stories into a text-based video game? This workshop will show you a different style of writing that will have you writing your very own games for you and friends to play!

So much has been going on since I last blogged!

First, I got to meet Darren Shan. For those of you who don’t know, Mr. Shan has been an inspiration of mine since I first discovered his Saga of Darren Shan series (misnamed in some countries as “Cirque du Freak – that’s actually just the title of the first book). I was introduced to his work while I was at Kidsbooks, and I’d taken a call from a teacher who was concerned about the contents of the series. Her grades 6+ wanted to read it, and she wanted to know if it was too dark.

Since that’s not a question I can answer without reading the book first, I thought it only fair to judge the book after I gave it a shot. Wow! I was hooked! Here was a series with simple English, but extremely complex plots and twists.

I’ve been a big promoter of Darren Shan’s ever since, so when news came of him possibly (and then definitely!) coming to Vancouver I was stoked. I immediately phoned Phyllis Simon at Kidsbooks and asked if I could meet Shan backstage, and she was able to do that for me. Let me just say that Darren Shan is a super nice guy. He’s the type of author that makes you glad for his success! 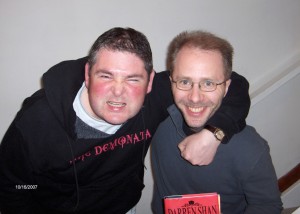 Then on Friday I had a workshop at BCTELA. I’ve been feeling as though my map making seminar has perhaps ran its course, and that maybe it was time to try something new. I had tried a fun hero vs. villain workshop with my CWC students the week before that went over well, so I thought I’d give that a shot with the teachers.
This is what happens when one tries something new:
First, the computer the school had was using had an older version of Power Point than what I was using. I tried downloading the Power Point viewer, but the newest one is only compatible with Windows VISTA. Can you guess which finger I’m showing Microsoft?
This meant I had no visuals. What I did have was an hour and a half to fill. I thought fast! I borrowed the laptop from the Kidsbooks display, because I knew they were using Windows Vista. My student techie helped me to hook it up to the projector … and thankfully that worked! Except for the fonts, which weren’t compatible between my memory stick and the KB Computer. But at least I had photos. The rest I could talk my way through!
The workshop was a huge hit! The teachers had a blast, and were impressed with how easily they could start a story by using my technique. What a great time!

After that, I scooted on down to the Surrey International Writers’ Conference (hereby known as SiWC) for the weekend. I managed to make it for the dinner on Friday, and two workshops on Saturday, plus a great party with the Compuserve Kidlit crowd on Saturday night. At the party, Diana Gabaldon read from her newest work and Jack Whyte read from a Broadway play he’s been working on.

Tomorrow I’m off to Seattle to see Walter Dean Myers speak. That should be interesting!

And, yes, I am writing up a storm. I have a writer friend who I have to check in with every day and confess either how much or how little I’ve written. I never want to say zero pages!