It’s taken me some time to write this last part of the trip I took over a month ago. As always happens, life gets in the way, time suddenly disappears, and now I’m probably going to write two or three blog posts of all the things happening right now. 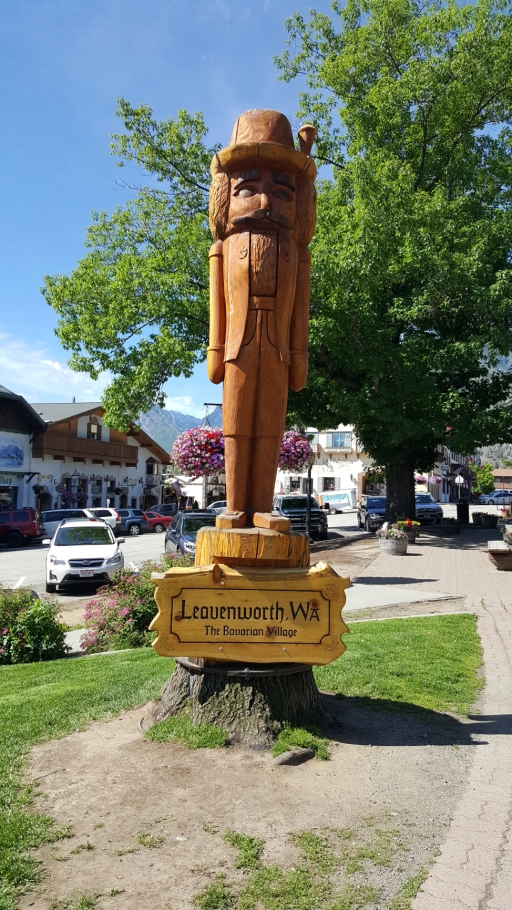 First, Leavenworth, Washington. Travelling to this town in the Cascade Mountains is a little like going to visit Santa’s village. The town is made up to resemble an old Bavarian village, and oftentimes storefronts will play Christmas music even though it was sunny, nearly 35 C, and the beginning of summer.

One of the reasons I chose to visit Leavenworth was that it fared well as a “dog-friendly” place on the Bring Fido website. When Grinfinn and I arrived, we took a walk around needing first to find the pet store to pick up some supplies.

A Paw Above was friendly and helpful in getting me Grinfinn’s food and a carrier just in case he needed to rest from the heat and all the walking I was planning to do. Just one note here, is that I had opted not to take dog food with me over the border as I had been told by friends that I wouldn’t be allowed to bring it. I have not been able to find any documentation to suggest that is accurate, and in subsequent border trips I have brought dog food with no trouble.

Once we were set for supplies, the owner of A Paw Above asked if I wanted a list of dog-friendly restaurants for my stay in town. I said yes, and she provided me with one. This came in very handy (and I won’t reproduce the entire list here, as you really should visit her store for the list if you go to Leavenworth.)

Leavenworth is not a large town for walking, and the main drag was just a few blocks long. If you’re in the mood for shopping, there are plenty of unique shops and for the foodies there are some delicious places to eat. It only took me a few hours to see that part of Leavenworth, but luckily there is more than just shops.

Below is Grinfinn after being served a bowl of fresh water at our first lunch spot. Uncle Uli’s had a large patio area where Grinfinn and I were able to have some shade and a good meal. I had the burger, and Grinfinn had his kibble. And maybe a french fry or two…

As I noted above, it got very, very hot during the day and Grinfinn tired out quickly. He did enjoy being carried around in the dog-carrier, and on this trip I found that this was a life-saver. 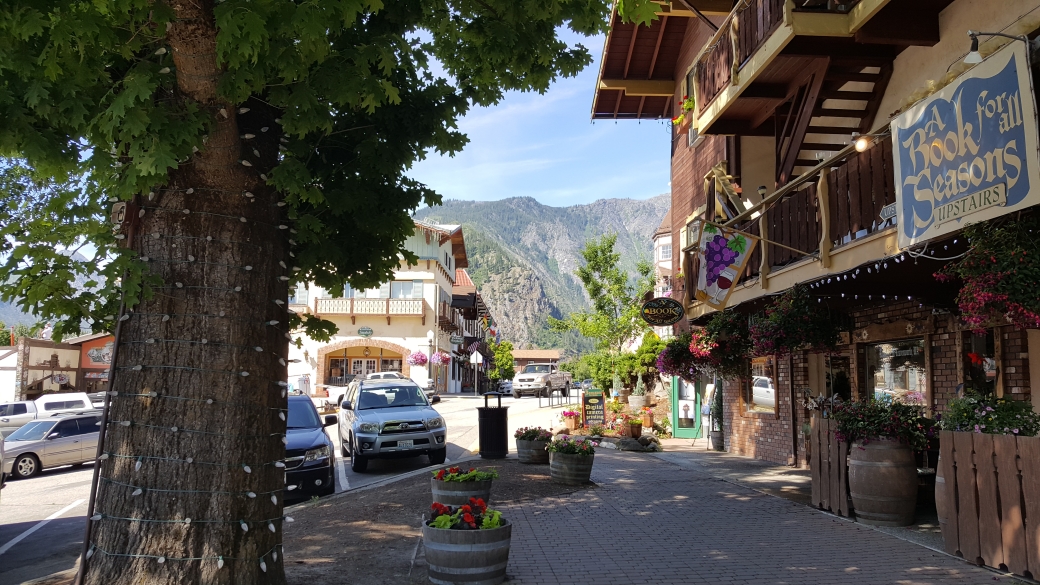 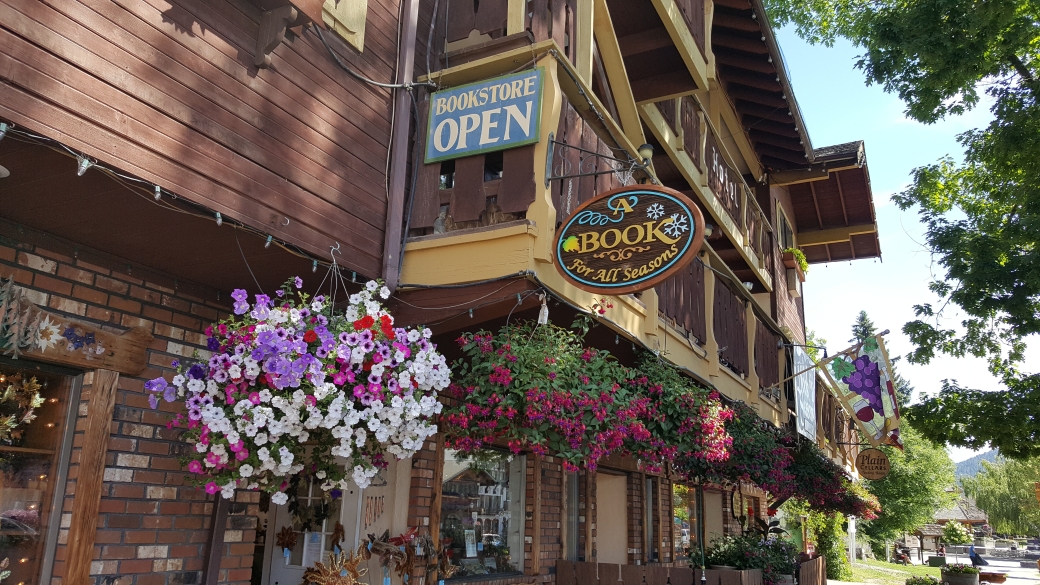 The second restaurant I tried, also with a dog-friendly patio, was the Icicle Brewing Company. It was so hot at this point, that I asked for a recommendation and the server suggested a plate of cold cuts, cheese and crackers. It was perfect and delicious. 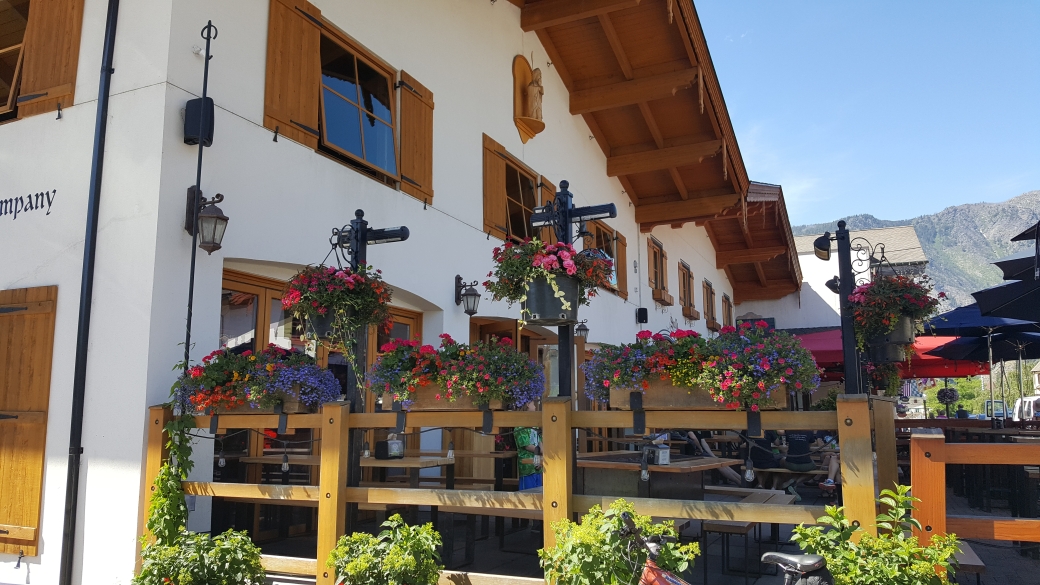 The temperature had risen to almost +35C that day, and Grinfinn was really needing a break. There was a “ghost town” nearby that I wanted to check out, so we headed out to Trinidad, WA. 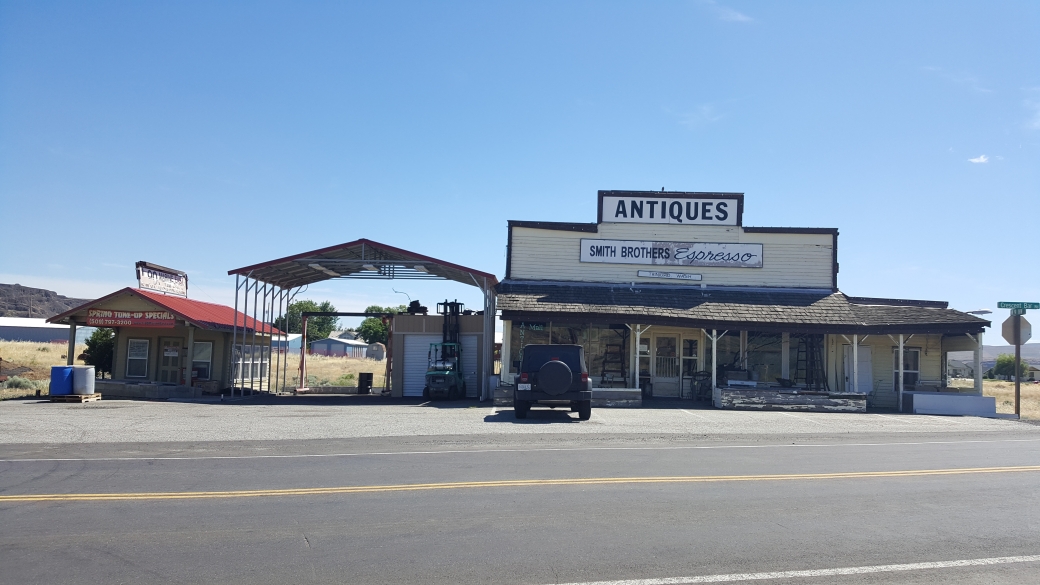 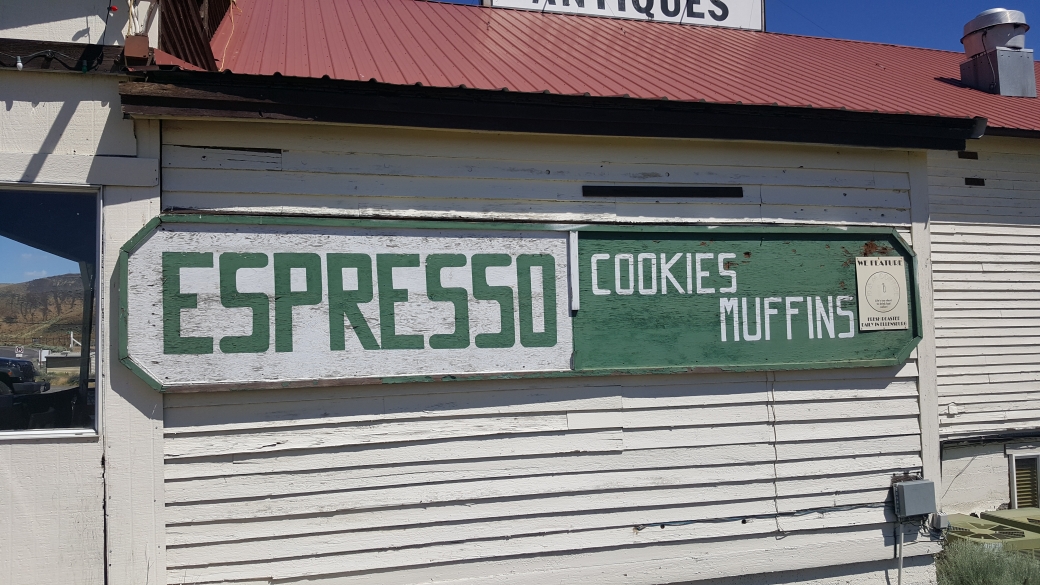 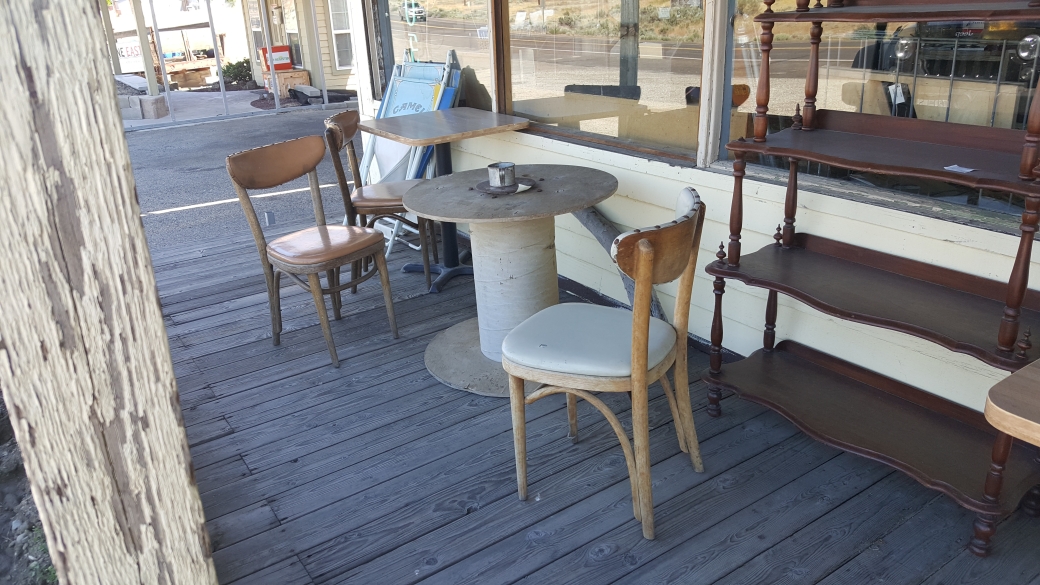 This is all that is left of the original town. And, unfortunately, it was closed until the weekend so I didn’t get to see inside.

But the journey there gave Grinfinn a chance to cool down with the Jeep’s air con, which seemed to make him pretty happy.

The third day, Grinfinn and I headed back on the road to return home. What I haven’t mentioned yet is that I kept seeing signs in Leavenworth for a “water park,” which I had interpreted to mean one of those parks where kids get sprayed with water and swim in a pool. As always happens, I had taken a wrong turn on my way out and wound up driving past the water park–also called Enchantment Park. 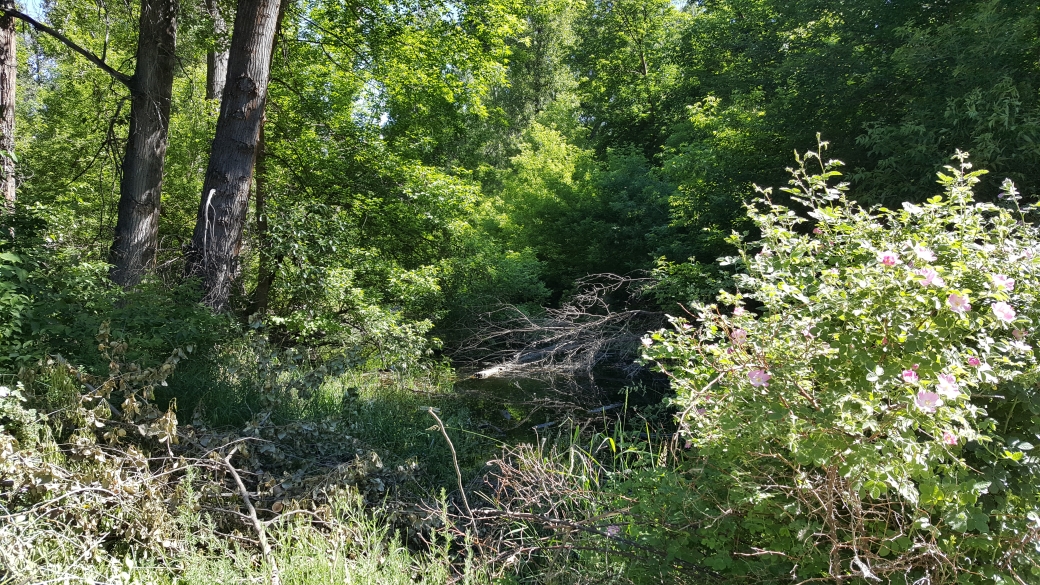 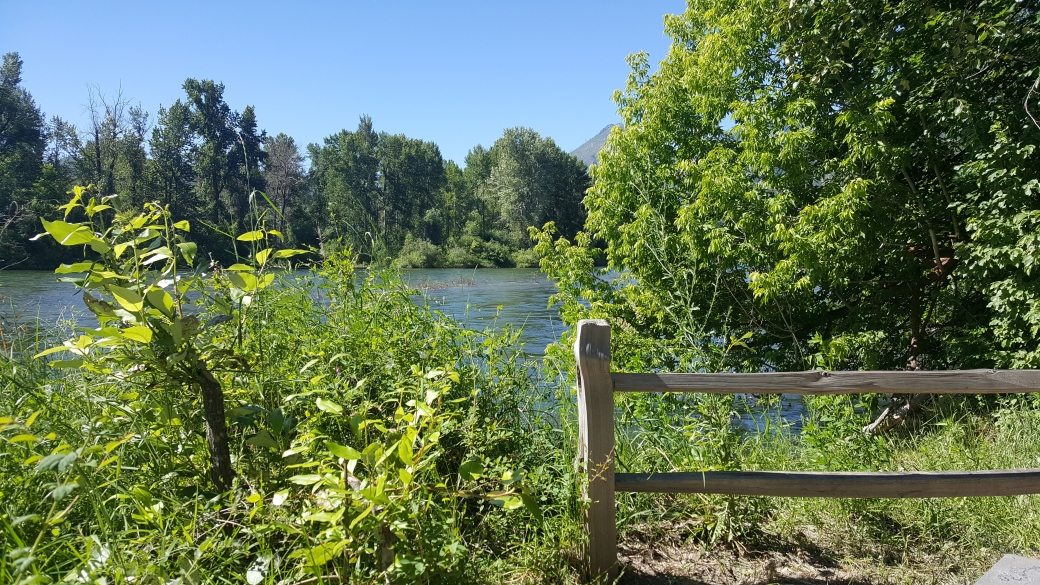 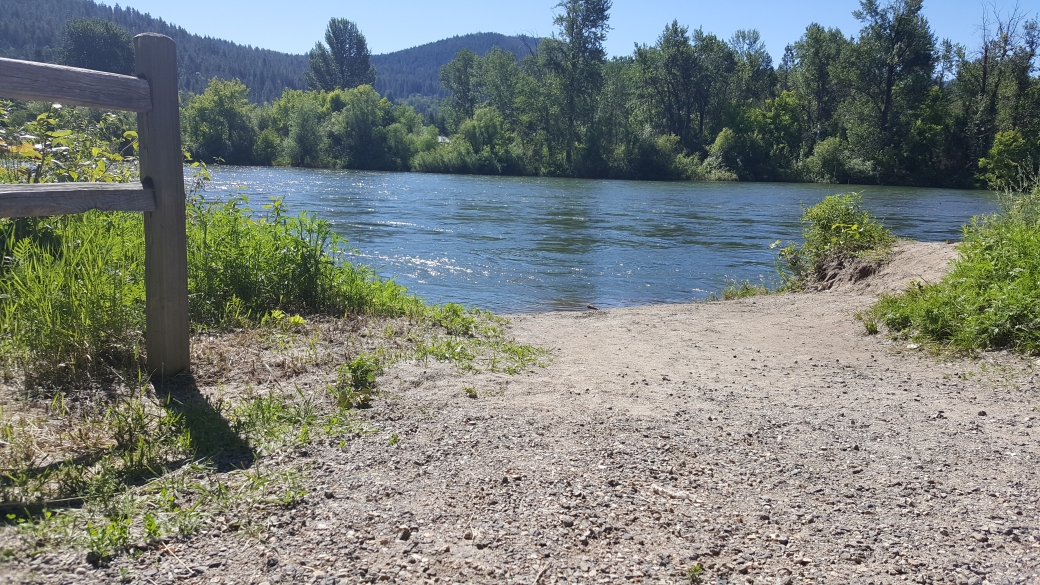 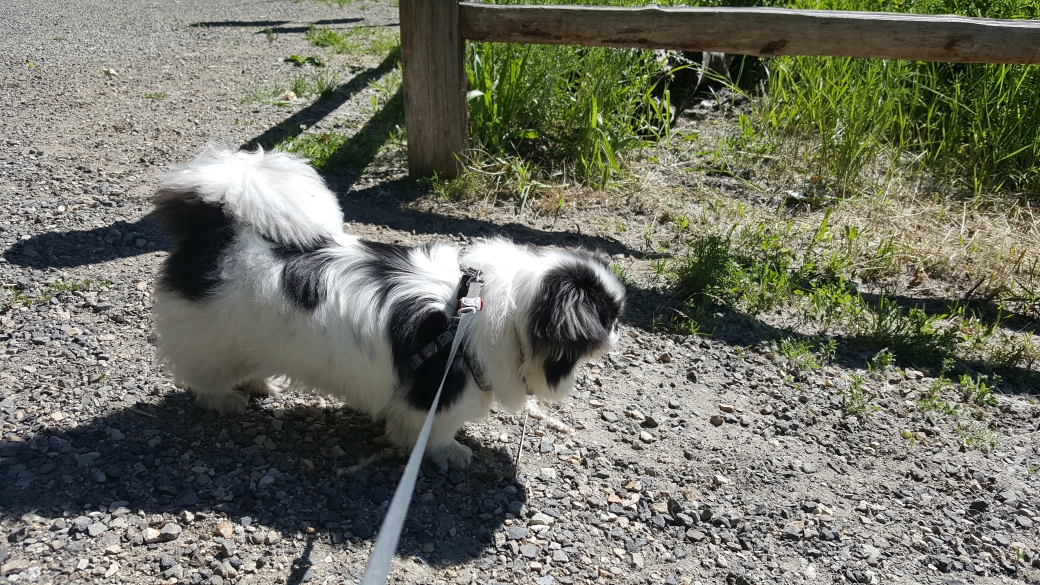 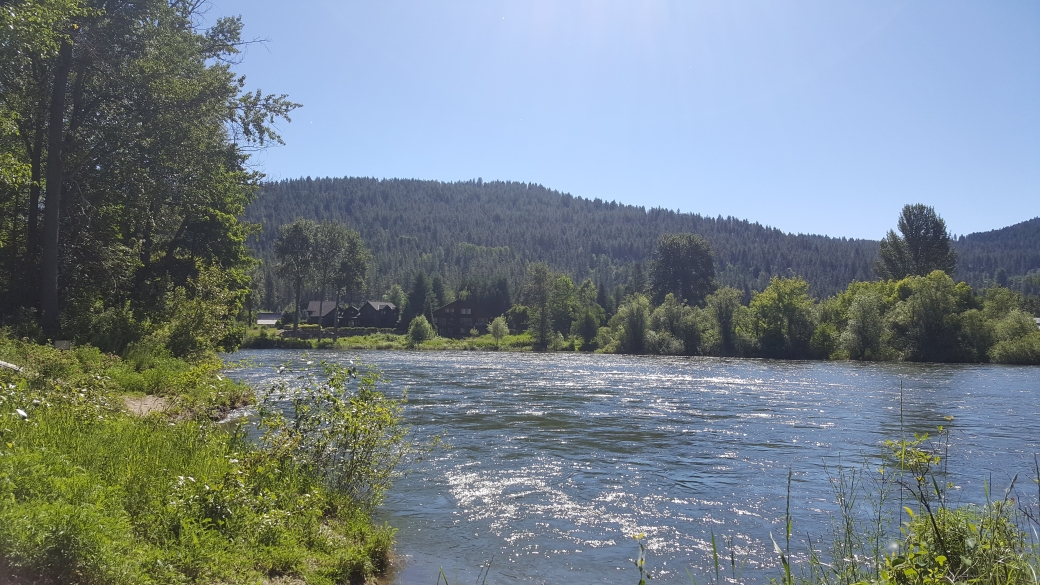 It was still early in the day, so I pulled into the lot and took Grinfinn for a short walk into the wooded area. We sat and enjoyed the early morning air, and wouldn’t you know it I saw a deer swimming in the water!

At first I thought she was struggling, but then she climbed onto a sandbar and watched me for awhile. After a little bit of her and I assessing each other, she climbed back into the water and swam towards me.

I had mentioned in a previous blog post about Zeke’s Drive-in and how I couldn’t get a meal as the server didn’t understand that my VISA required a PIN for it to work. (She just thought it was declining due to lack of credit.) Well, on the way back I made sure to have cash so that I could try their burger and fries.

Definitely worth the stop as the service is very friendly and the food is great. I do recommend bringing cash if your card requires a PIN. And there is a cat that is very grumpy, a little territorial, and doing just fine so it’s best to just leave it alone. 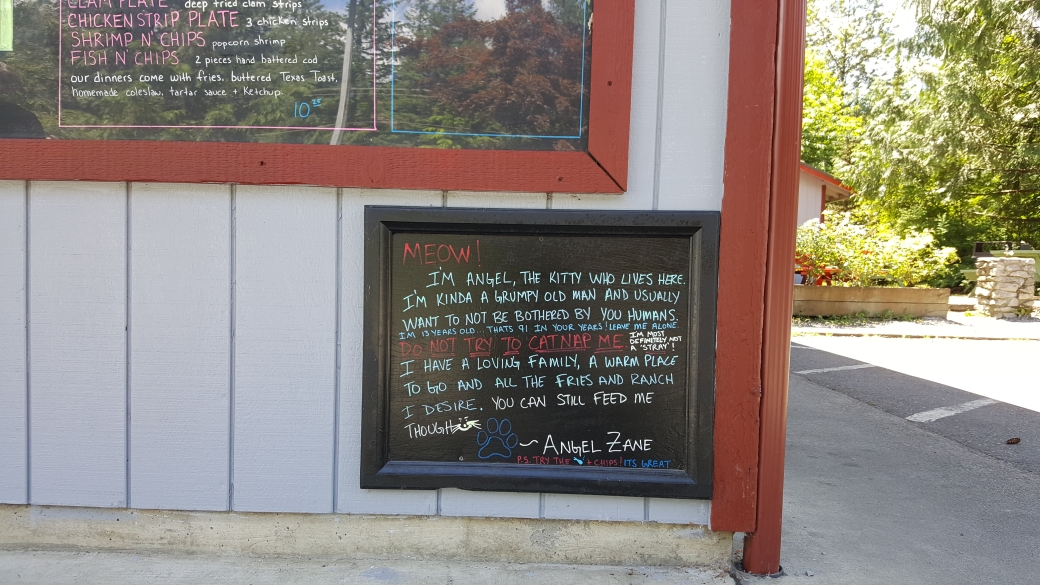 This is Angel. The photo is blurry, as that’s as close as I felt comfortable getting.

2 thoughts on “James in His Jeep Getting Java–Camping, Leavenworth, and Grinfinn! Part Three”