Over the last few weeks, I taught several workshops at Place des Arts in Coquitlam. My afternoons were spent with the 8-12 year olds, working on comics that they starred in. How did I do that, you may ask?

First, the students created characters – completely independently and not as a group. (I find this is key.) They were then randomly placed into groups, with strange characters (one group had Darth Vader and a genie,) where they wrote a two-page comic.

Next, I used my green screen as background. The students then chose from a plethora of props and costumes, and posed in place as a photo was snapped. The photo is then uploaded into a program called Comic Life Magiq (unfortunately, this is a version no longer available,) and the green screen background is replaced with one of the student’s choice.

The morning I spent with the teens, and we worked on making a magazine. The students created an amazing product that they designed and wrote – and then using iBooks we created a pdf and iBook version.

All in all, it was a fantastic couple of  weeks at Place des Arts with dozens of children and teens who all worked hard at stretching their creative brain even though it was sunny and hot outside.  As for me, I found it inspiring and encouraging to see so many youth so happy and having such a great time. And yes, I even managed to get my own writing done! 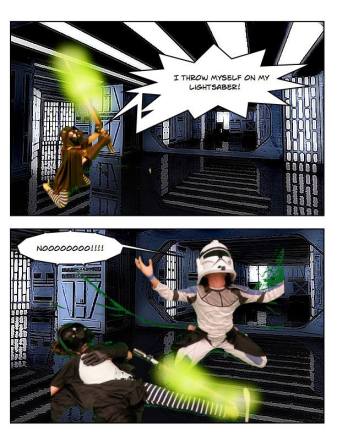