Today is, without a doubt, my favourite holiday. This is the one day a year when we get to shed our everyday selves, and delve deep into our alter egos. We get to be not what we are, but what we are not.

It’s a day of creating character. I can’t help when I don a costume but to consider who the person is that I am pretending to be. What’s his back story? Where is he going? What has brought him into our world? For me, this day is a lot of fun.

Just as much fun is to watch the children as they go door to door. This will be the first year in over six years that I’ll have kids come looking for candy. Up until this year I lived in an apartment with drug dealers, meth addicts and a guy with a really loud drum living around me. Who would, in their right mind, send their children into that war zone? (You may be asking yourself now why I stayed there for as long as I did – simply put, Vancouver apartments don’t allow pets.)

Some of my most cherished memories are:
(1) Grade 1: The Han Solo costume that no one could see in the dark, so I got yelled at by a cranky old woman for not wearing a costume.
(2) Grade 2: The Snow Beast from Return of the Jedi costume that was made out of old underwear.
(3) Grade 3: The Zorro costume that was, I will say, up to par and just awesome. (Mom felt badly about me getting called “underwear man” the year before. Truth is, I thought the snow beast costume was awesome…)
(4) Grade 12: The Robin Hood costume that I still have today – and find at least two uses for throughout the year.
(5) Last year’s Reaver costume that had half the party asking what I was, and the other half screaming, “I love Firefly!” I won some award … I believe it was most original. 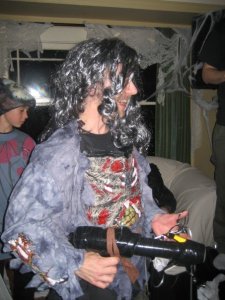 I’m prepared for several hundred costumed tikes to come screaming, “Halloween Apples!” (They’re arriving as I type – must be starting on their way home from school?) I’ve bought bite-sized candy bars, as well as sour treats and those yummy raspberry gummy thing-a-ma-bobs. My plan is to start with the candy I hate most – but got stuck with in the package deal I went for. Get rid of the peach sours, and then the Arrow bars. Next I’ll move onto the Mars Bars, Snickers … and hopefully I can stop there. If not, I’ll give up the Reese Peanut Butter Cups, the Reese’s Pieces, and, yes, the Twix Bars. If I have to I’ll hand out the regular sours, the raspberry gummys and the Oh Henry’s. (I ate all the Coffee Crisp, Smarties and Kit Kats long ago.)